The dreaded day had finally come.

I had made it through my first year without him.

I had warned my family and friends that I was going to go into a social media and contact black out starting the 16th.

I didn’t know how bad that it was going to get for me. I didn’t want to fall apart with the world watching.

I made sure to drink quite a few beers before I tried to sleep on the 16th. I didn’t want to risk laying in bed. Reliving that life shattering phone call.

I slept deeply and dreamlessly till about 6am. Then I crept as quietly downstairs as possible. Made coffee while I watched the gray skies as the sun slowly woke up. Hoping the rain would hold off.

I took his orb from it’s normal spot and held it in my hands as I played his memorial photo video. It had been more than 6 months since I watched it.

The tears ran down in streams, silently and I watched the photos fade in and out on the screen. School photos, baby pictures, sports photos, then our photos.

Memory after memory hit me with each photo. I could remember taking each one and the look he would give me when I wanted to take his photo. The semi irritated but doing it to make me happy face. It made me smile and I felt a peace settle into my soul.

I only watched it once, then put it back in the case and stood watching the rain fall softly outside.

Missing him. Missing who I was with him.

I called Susan, to check in and make sure she was ok. We didn’t talk long but I needed to make sure she knew that I was thinking about her. Especially then.

Trina came down some time later and we decided that since it was raining, we would honor Franco by doing a Fast and Furious marathon. He absolutely loved those movies. It actually turned out to be a great day and excellent way to honor his memory.

As we prepared our shots of Jack Daniels to take for him, we both looked at each other and laughed. Both dreading the shot. As we lifted our shots up, I struggled to say his favorite shot saying, choking on the words. Trina just hugged me close. “Here’s to you…..here’s to me….the best of friends we will ever be…..but should we ever disagree…..fuck you…..here’s to me.”

I don’t know how that saying got started with us friends but he had said it for years. We both would say it together, whenever we were taking shots.

Over all, I thought I handled the day well. Until I realized that I hadn’t been coping well. I stopped doing basic things like cleaning up, paying bills and just let things snowball up.

Neal had been asking me about working on his bikes and I kept putting him off. I had to wait for probate but also, I was not ready to put hands on his motorcycle.

The motorcycle he died riding.

Finally I couldn’t avoid Neal anymore so we agreed that he would come over and we would work on it.

I started without him. Dismantling the metal crate around it. Removing the broken and damaged pieces. As I removed piece after piece, I could feel my burden getting lighter and then a thought popped into my mind.

I realized then that it was time. Time for me to stop being afraid of confronting this issue. Time to stop blaming myself and to get his baby running away. To take him on his final ride, before I bury him at sea. I know that I will do that this year, because in my soul, I know that it’s time to do it. 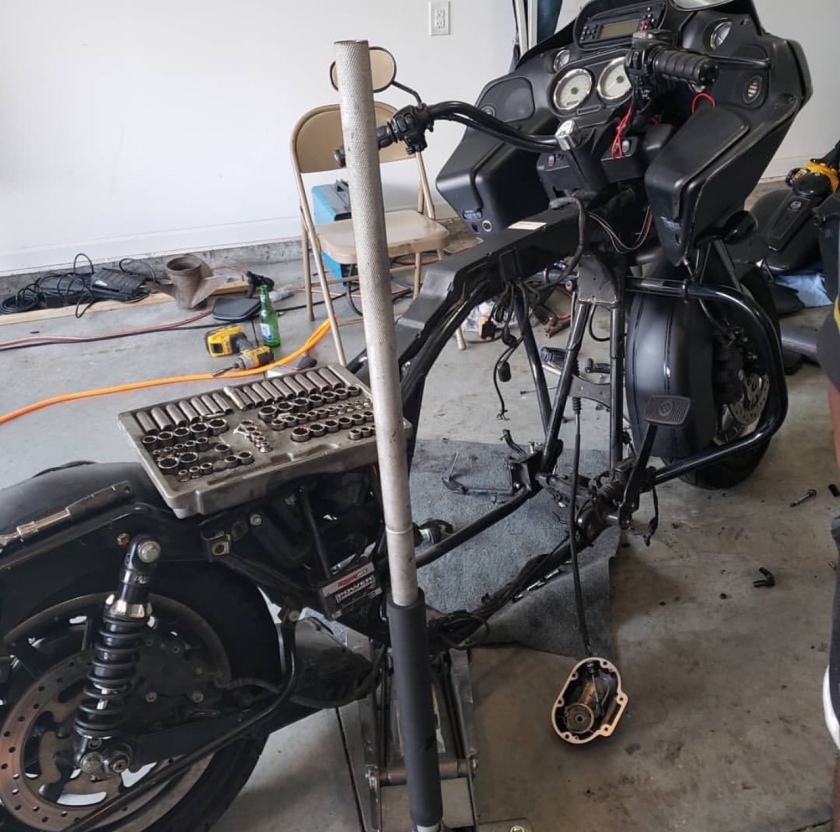 It took a few weeks, lots of beer and liquor but me and the boys finally finished swapping the performance parts and good parts from totaled bike to his second bike.

His second bike had broken down on Neal while he was riding it and I was in Africa. There was a bolt inside the one of the jugs and it had lodged onto the valve head and seized. We were able to swap the entire top end pieces but realized a few odd and end things that need to still be figured out.

I know Neal was nervous as we put the tank on and connected the battery. Triple checking all the electrical connections. Turned the key and the panel lit up and we all held our breath as Neal hit the start button. It roared to life before the switch was pushed down all the way. It happened so quickly that it surprised us all and Neal cut it off immediately.

I stood with my arms crossed in front of me and just breathed in deep. Unable to speak. I was holding it together pretty well till I looked at Neal. That big man was red faced and trying to hold in his tears. I lost control then and we just held on to each other. Lots of high fives and group bro hugs were exchanged. We hadn’t videoed the moment cause I think we were all afraid it wouldn’t start.

We backed it out of the garage, started it again and let it run as we checked for leaks and noises.

I can’t even explain how beautiful a moment it was to be surrounded by the men that loved him the most and share this experience with them. To get our hands greasy, drink too many beers, cuss in frustration and laugh at our stupidity. To share the love we all have for motorcycles and for Franco. To hear his heart beating again.

Still have a long way to go till she is 100% the way I want but that is mostly cosmetic. I’m going to paint her because black was never my color. She will be chameleon colored in blues, purples and touch of pink. I want the blues to remind me of his eyes and the other colors cause I’m a lady rider.

I miss him more now than ever and I just hope he knew how much these boys loved him, how much I loved him.