About a month ago my friend Shauna put a post up on Facebook looking for participants to take part in a newly formed nonprofit called Uuzilo. 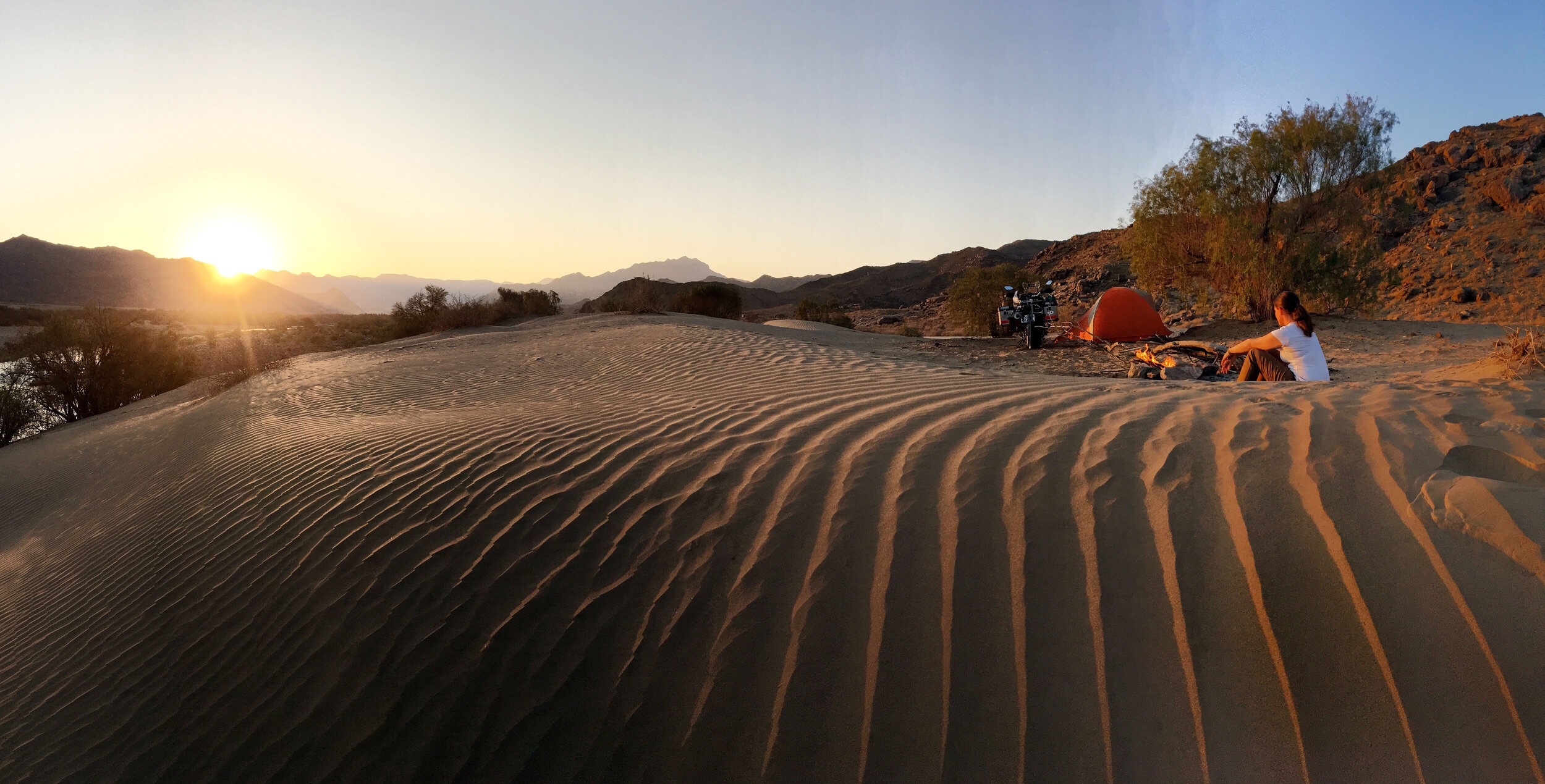 Its mission is to take people who are suffering from trauma and grief on a motorcycle to South Africa. The two creators are Andrew and Laura. Andrew suffered his own trauma and he escaped to the place that he had always wanted to see, South Africa. He was there for months. Just riding, exploring and letting the people he met along the way help him. The kindness of complete strangers let him release a lot of his pain. 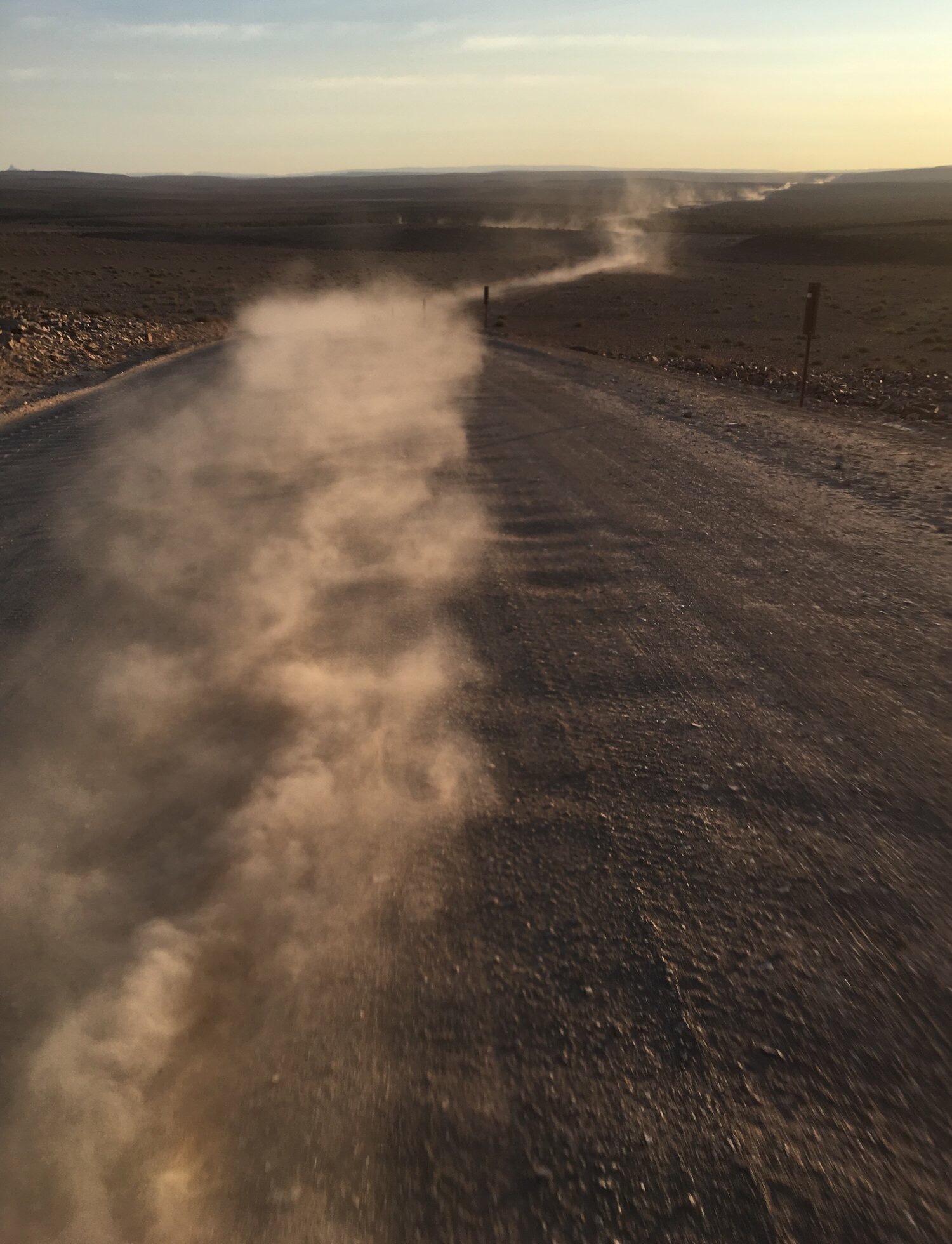 While visiting Victoria Falls he met a woman named Laura. They spent the next two days together then she left to go back to the US. Only to return to him months later and the two of them continued the journey on the bike together. They just got married about two weeks ago. One night, like a lightning bolt, the idea struck Andrew that they could start a nonprofit and let others experience the healing that same way that South Africa helped him. Through time, connecting with people and seeing new and exciting experiences.

While still overseas and working with terrible Wi-Fi connection, they started the non profit application process. They started reaching out to hospital, colleges, motorcycle shops and anyone else to try and find help on how to accomplish the mission and to find people in need. Which led them to Shauna, who is on the board for Warrior Expeditions, a non profit that uses long distance hiking as well as canoeing and biking to allow veterans a chance to deal with their issues and who has been in my life since I hiked the Appalachian Trail with them on their first year. Shauna tracked our progress from a psychologist point of view to study the effects of wilderness therapy and how it is healing our veterans.

Now Shauna is on Uuzilo’s board and lead them to me.

I emailed Andrew and basically gave him a word vomit email. I’m talking past history to now so he could understand me and who he was considering. I wasn’t sure if he was ready for this level of crazy. They decided to drive down a week later from DC and we had dinner at my home. It was very emotional and we decided that I would be their first participant.

Since their application with still pending, their lawyer suggested a go fund me to help with the cost of the bike, travel and logistics. Right now we are about a third of the way to the goal amount. Anything we don’t raise, is being paid out of Andrew and Laura’s pocket. They are fully funding my trip and will be by my side the entire way as my guides.

They are the most giving people I have ever met and also the ballziest (I have no idea how to spell that and I’m tired). They have been writing letters and emails to anyone and everyone for support and sponsorship.

Andrew walked into BMW and spoke with Gary Hardin, the head instructor at the BMW US Rider Performance courses. Gary was so touched by the mission that he offered to teach me to ride off-road in one of his courses. I just finished it yesterday. 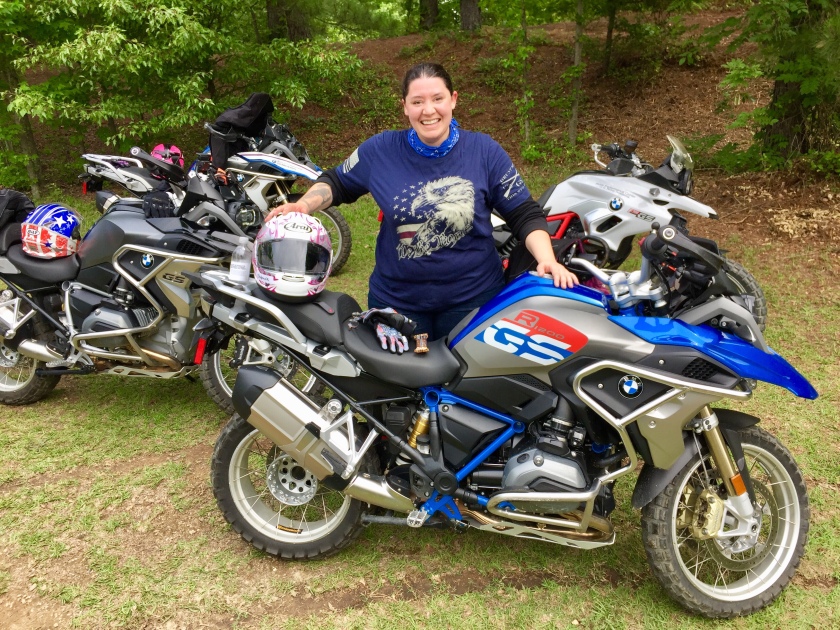 His brother Michael and Melinda were the class instructors. Their patience was astounding as I was so nervous.

1. I have never ridden off-road.

2. I have never ridden a BMW motorcycle

3. It had been years since I actually rode a motorcycle since I had sold mine when we left Florida.

There were people from all over the US attending and flew in specifically to take the class. Michael and Melinda explained each task thoroughly, showed us how to do it and then we took turns doing the task. Getting directions and feedback as necessary. 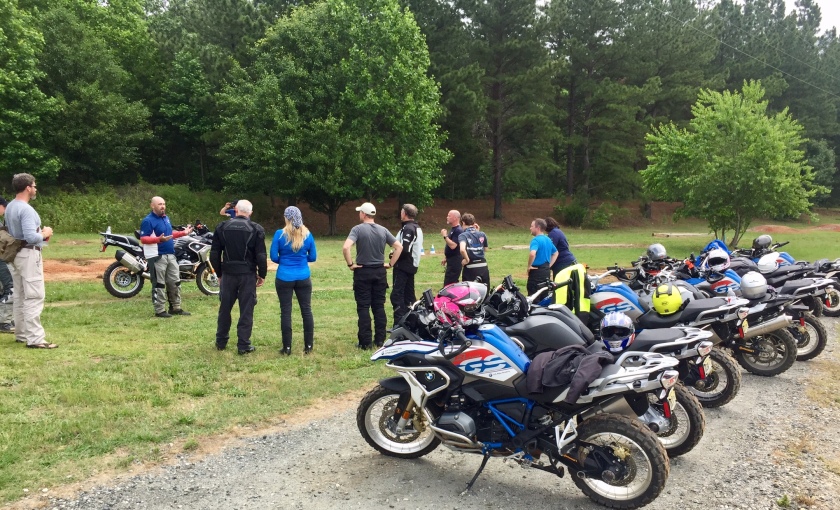 Did I mention that we had to stand up on the footpegs the whole time. I almost shit myself when I heard that but it’s crazy how simple it was. We learned to sit side saddle, S turns, avoiding obstacles, driving in ruts, over washboards, small hills and emergency stopping in loose gravel. Plus so much more. I dropped my bike 3 times. Twice in ruts (the bane of my existence)

I got really good at bailing off the bike. 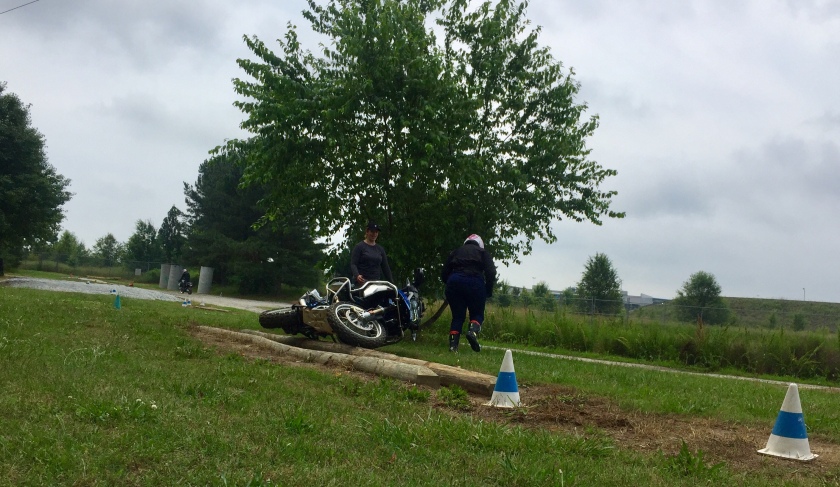 The third time I wrecked, my front tire hit a massive root and I washed out into the brush. I broke the side stand switch on a rock so the bike wouldn’t go into gear since it thought the stand was still down. So they towed it out and brought me another bike. 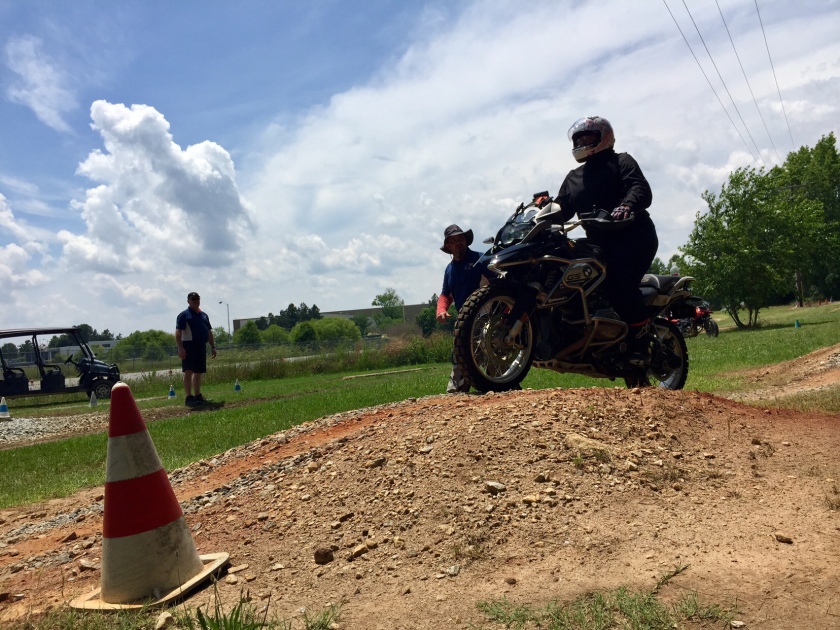 It was so hot and humid. We were all pouring sweat most of the time since we were going under 10 mph with zero airflow. Mcfatty was dying.

The last thing that we learned was the emergency breaking in loose gravel and it was so tough since I was so tired and just completely wiped out from the day. We all managed to do it and we went on a celebratory adventure ride around the complex to complete the end of the course. 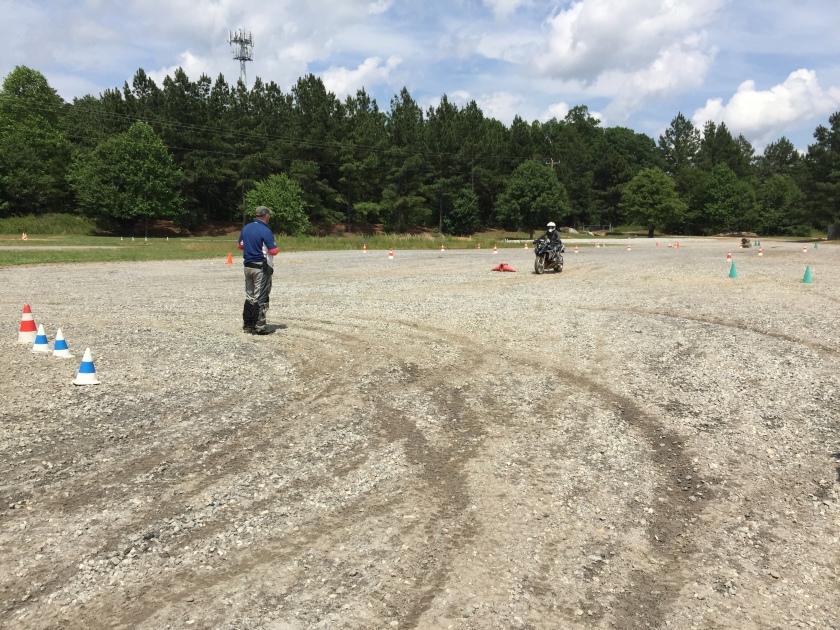 We all got a certificate for completing the course and a sweet swag bag. 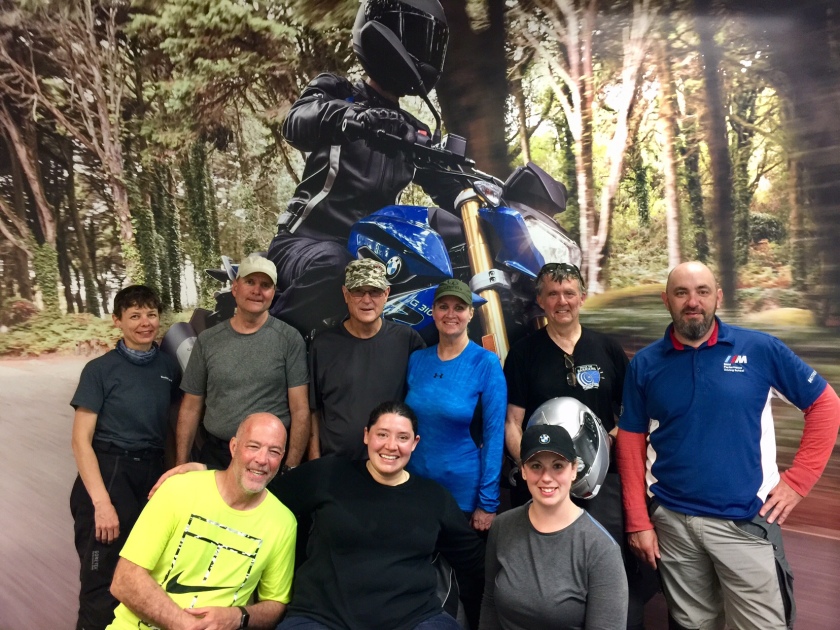 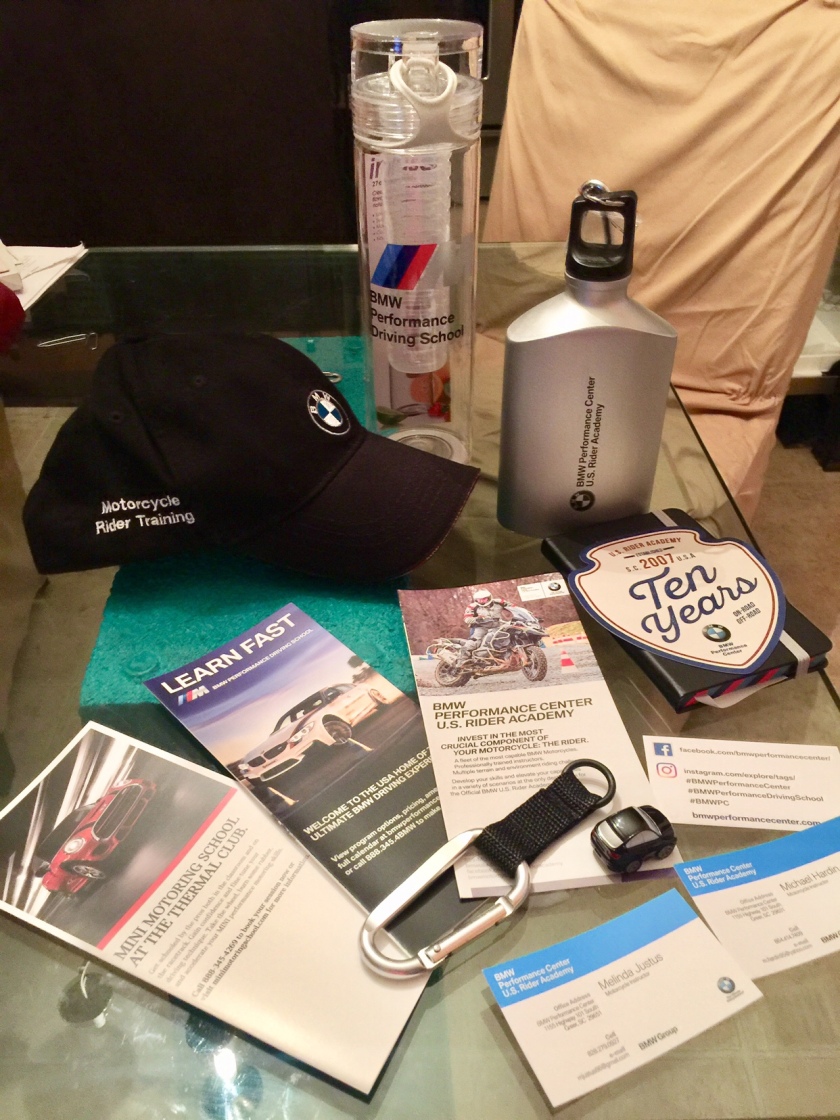 Remember when I said that Andrew was ballsie. He somehow met Brian Pangelinan at Tucker Rocky and Brian Weston at Arai who have helped us out with helmets and gear. 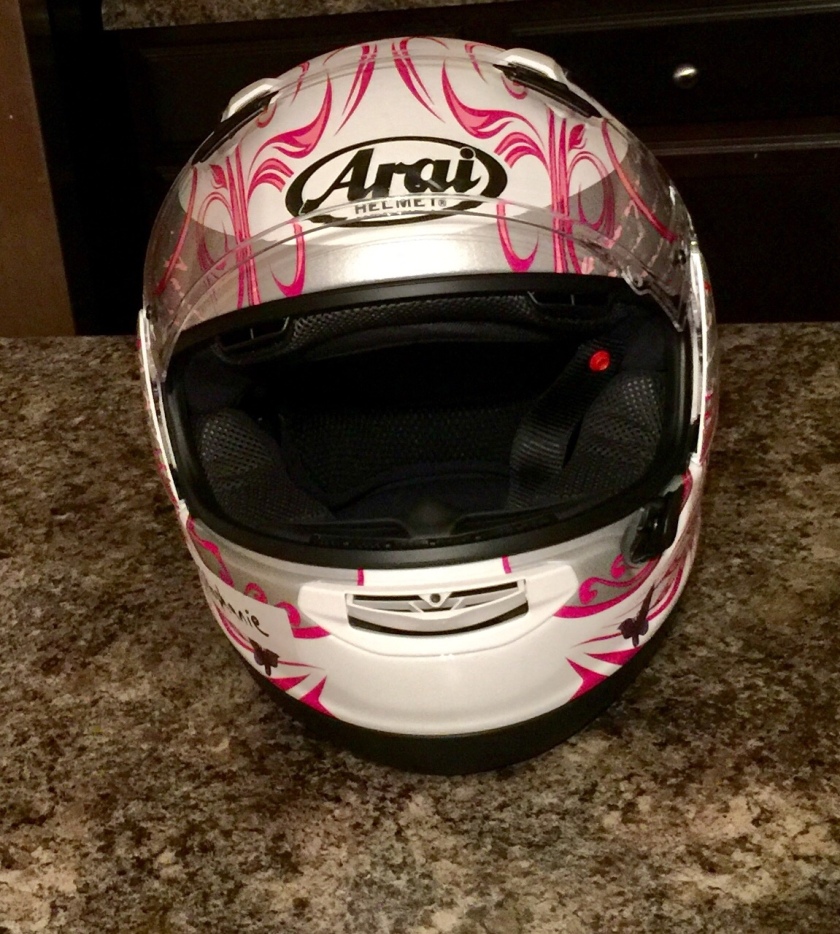 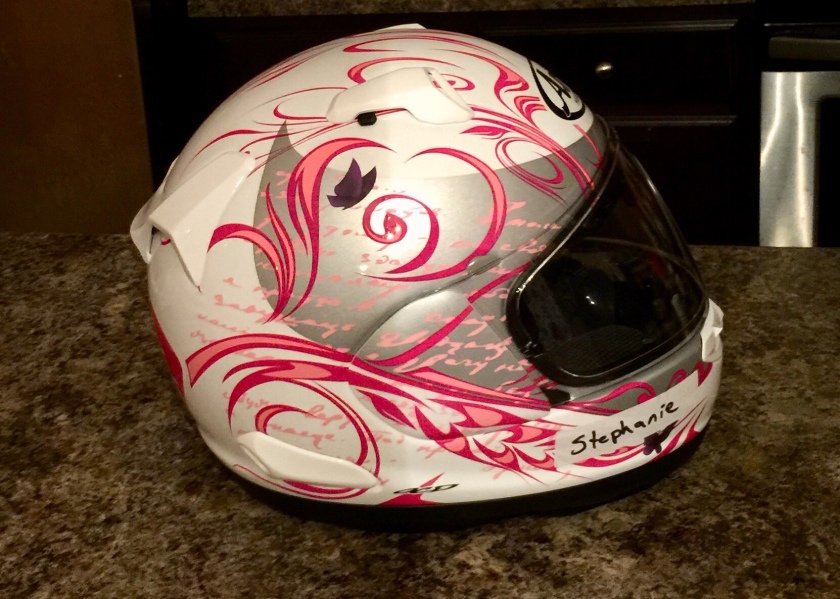 I chose a white helmet with pink piping and butterflies. It’s very feminine and it makes me smile since it’s very tongue-in-cheek. I’m not really that feminine in general.

Things are moving very quickly now. We will be leaving in July for about six weeks. I’m excited, scared, and nervous but ready. I’m ready to leave this place and confront my grief head on. I haven’t had time to fall apart, there have been to many things that I needed to handle at work and for his estate. I have gotten really great at pretending to be OK. But I’m not…..I’m far from it.

I know that leaving the world I know behind will help me to heal and get myself to a place where I can be more than OK. I can take his keepsake and keep him with me, share this adventure.

I still need someone to watch my cat though. He’s very needy and needs a lot of attention all the time. 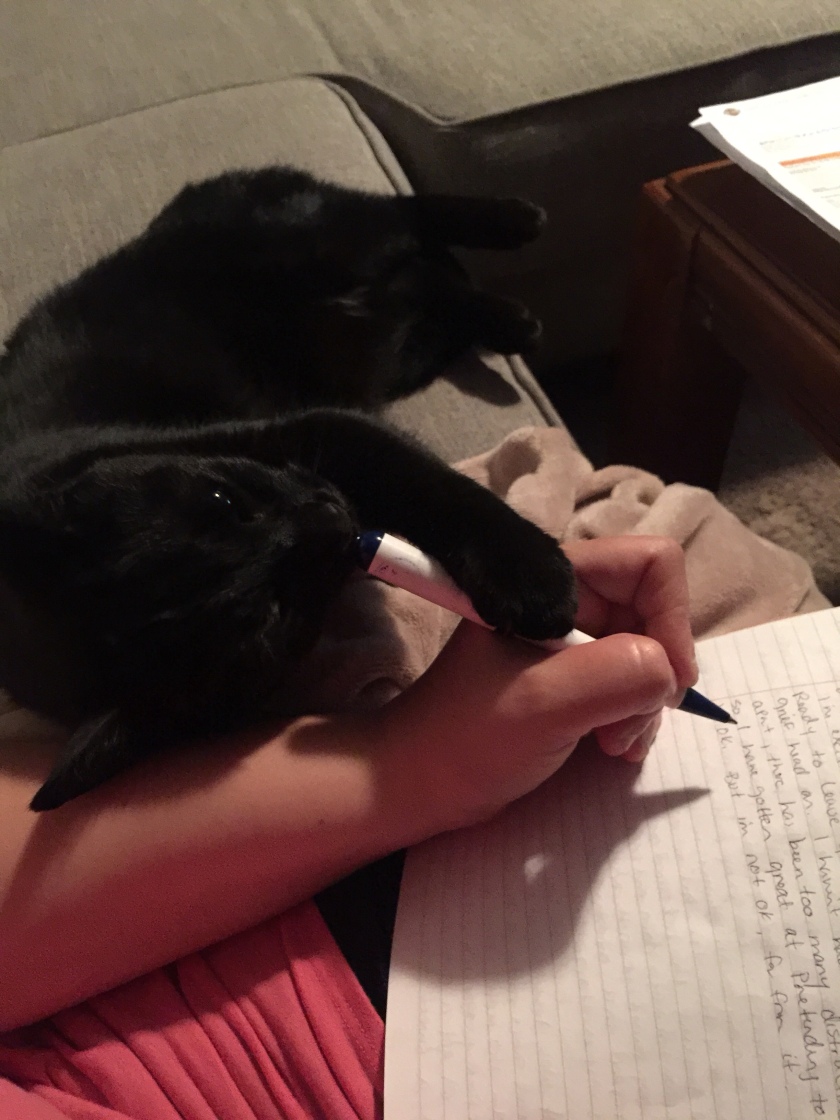 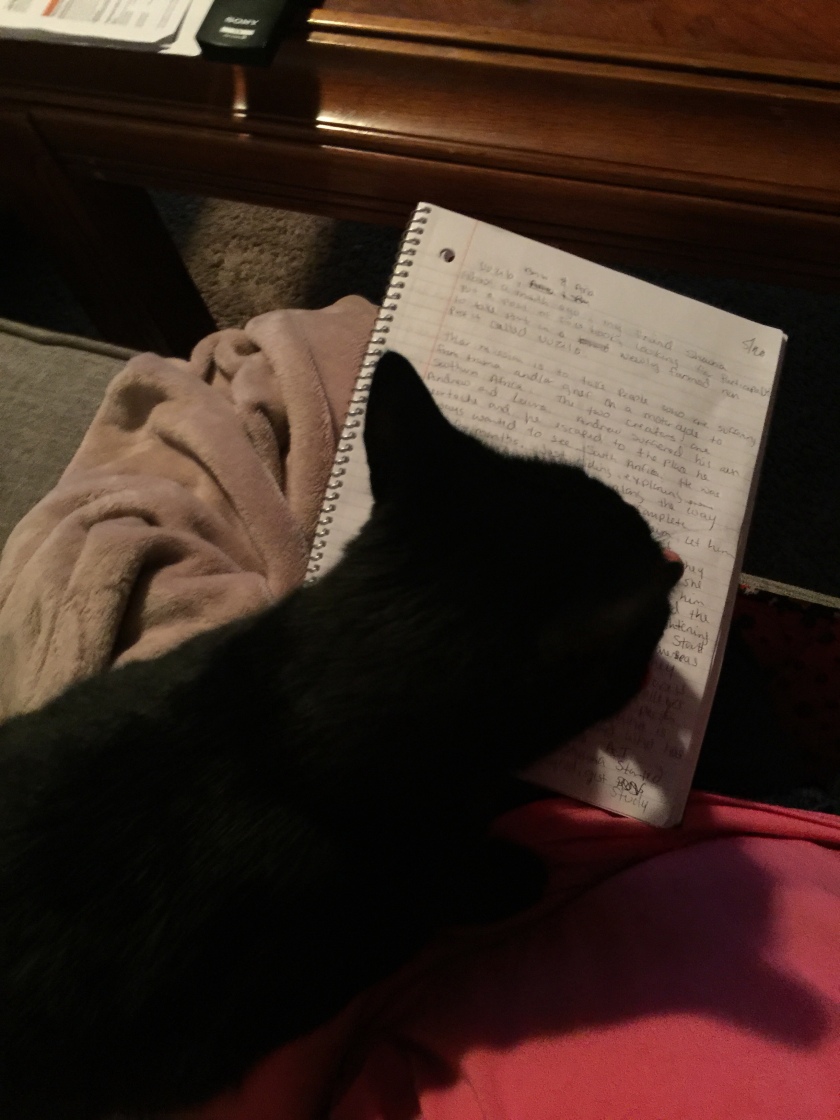 My family and civilian friends who I have told that I am leaving, thinks I’m crazy for wanting to do this. About how dangerous it is and wants to know why I don’t just tour the US. My military friends just get it.

There is danger everywhere and if Frank’s death has taught me anything, there is no time to hold back. To be timid and afraid of what might happen. Cause I know first hand how it feels when your worst fear is your reality.

Precautions and preparation is always key but I can’t explain the desire to disappear to someone who has never felt the need. To disconnect from the familiar and learn more about yourself in the process.

If I could afford it, I would leave and travel forever. Always searching for something new and feeling the pull to somewhere greater than myself.

I received a gift for Christmas of a map of the world with gold leafing covering the different countries and cities. The point is to scratch off and show the bold color underneath the gold. Frank and I took turns scratching off where we had both been in the world and we have been a lot of places but when you step back and look….we had barely made a dent. We decided then to start traveling more. To visit all states in the US and then start knocking out countries and cities. 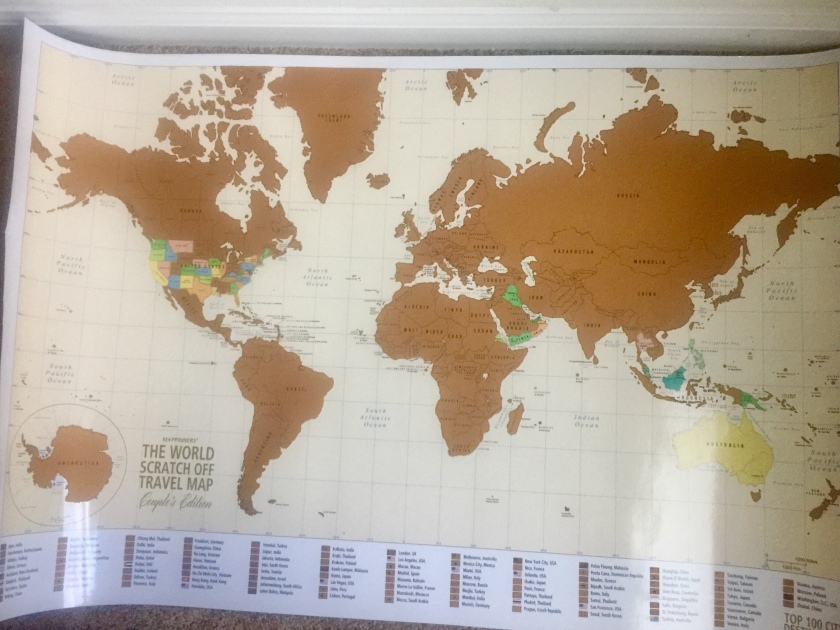 It’s up to me now to finish our plan. To honor his love of travel and adventure that matched mine.

If you want to read more about Uuzilo, check out the website at https://uuzilo.org/

You can also check out our go fund me page at